La Coalición de creadores e industrias de contenidos and LaLiga have signed up to an historic agreement to promote a common front against digital piracy, a scourge that seriously damages the development of the football, publishing, film, series, music, and video game industries and makes up 5% of the Spanish GDP. 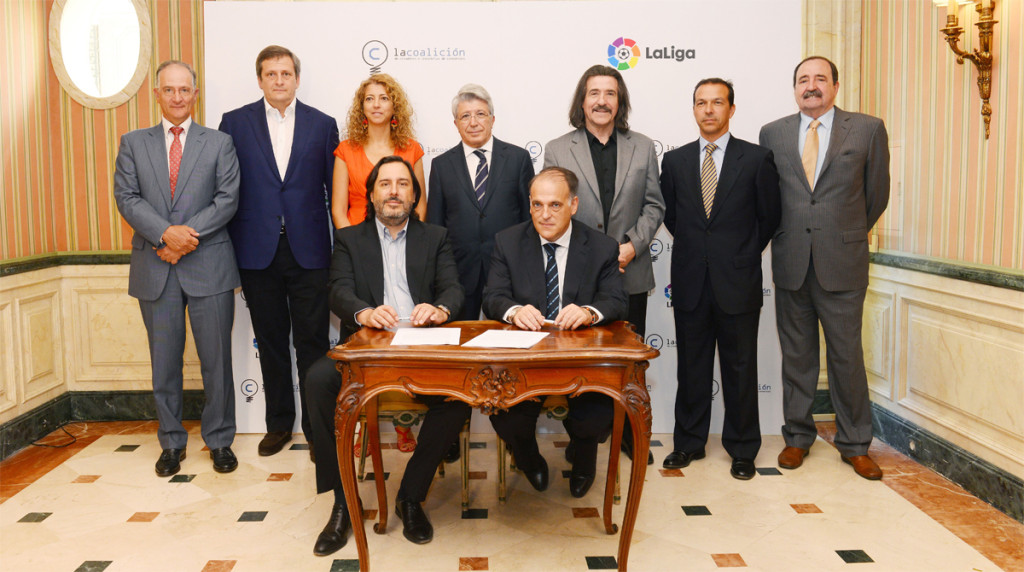 In a moment that the cultural industries, as well as the sports and entertainment content are suffering losses of 1,700 million Euros as a result of this illegal practice, the Liga and la Coalición will work together on all fronts against digital piracy. From greater social awareness and educational programmes, to the improvement of the laws and their efficient application.

‘It’s important to join together with a group like the Coalición and remain united with the sectors affected by piracy. In this way we will not only be able to educate the society, but also fight for our rights and defend culture and sport’ declared Javier Tebas, president of the Liga.

‘The Coalición is made up of the main creative sectors in this country and today we take one more step, adding up our efforts with the Liga, which is one of the main suppliers of pirated contents, to finish with this scourge that is blighting every sector’ emphasised Antonio Guisasola, president of la Coalición.

The Coalición and the Liga formalise this pact, with the participation of the presidents of the main associations of the sector, to consolidate a real strategic alliance, whose intention is to implement an ambitious agenda of initiatives and projects to inspire a legal and sustainable digital market. ‘This agreement follows the trend set by surrounding counties, like Germany, France or the UK, where these industries and the Premier League also battle together against online piracy’, stressed the parties Turing the signing of this agreement.

Furthermore, from September, the Liga and the Coalición will launch a national campaign across schools in Spain that will develop throughout the 2015/16 academic year, and will pioneer the teaching of values and respect for intellectual property to the pupils.

According to the agreement, presented in Madrid on July 21, 2015, the Coalición and the Liga in addition to their collaboration in campaigns of social awareness to encourage responsible use of sports contents, cultural and entertainment will support and promote legal safeguards and a crushing application against such infringements that culminate in a solid case law, that allows a look at the blocks of illegal portals such as Rojadirecta or The Pirate Bay in our country.