Though digital piracy has experienced a slight decrease in Spain in terms of absolute figures, the percentage of citizens accessing pirate content remains the same or even increases for some sectors such as music and leisure books. Thus, in 2016 there were 4.128 billion illegal accesses to content, 4.2% less that in 2015, with a value of 23.294 billion euros (-3.2%), but the loss profit suffered by cultural and content industries increased 6.8%, to 1.783 billion.

These are some of main results gathered by the Piracy Observatory and Digital Contents Consumption Habits 2016, carried out by independent consultant GfK and released today by the Coalition of Creators and Content Industries and LaLiga. «The situation proves that legislative measures have a positive impact, but the results of their implementation are still insufficient, so we need more resources to be allocated and greater agility in the procedure. We are witnessing the first decrease of piracy in the last ten years, and it is an excellent opportunity to revert the enormous damage it causes to creators, to the industries, but also to employment, the public purse and to our country’s competitiveness in a global market. We want to keep up with our neighbours’ results, countries such as Italy or Portugal, and get as close as possible to the United Kingdom, France or Germany», stated Carlota Navarrete, director of the Coalition.

“In LaLiga we are satisfied by the results that the Observatory of the piracy gathers, but it remains a lot of work still to do. We have seen that the fans are starting being aware that the piracy harms his equipments and others. For the football, the piracy across Internet has descended from 21 % to 18 %, between 2015 and 2016, in number of users, but we have detected that there are new other ways that have been started to use to accede illegally to the football», stated Javier Gómez, corporate director of Laliga
For the third consecutive year, the survey has included data regarding the impact of piracy on television shows and the retransmissions of football matches, besides the income sources of web sites offering pirate content. 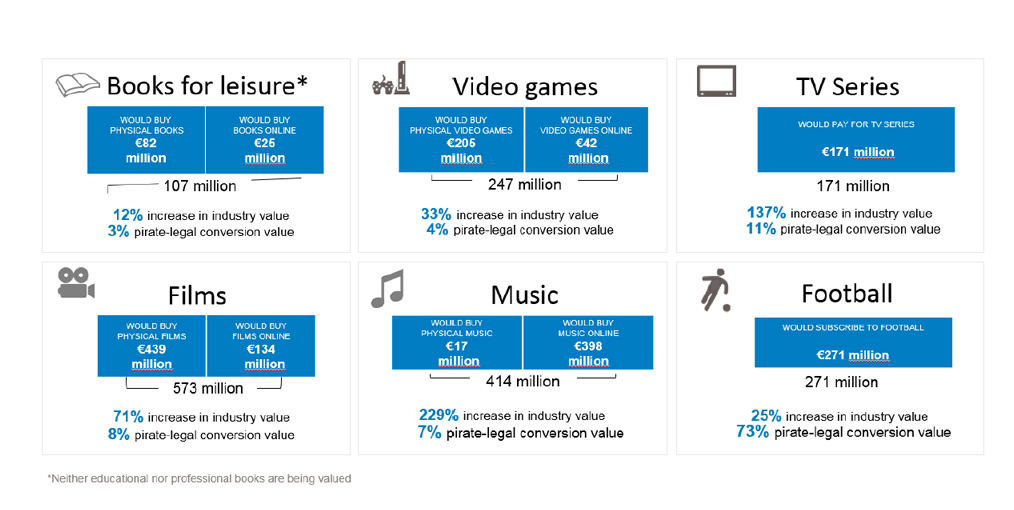 47% of consumers who access illegal content argue that «original contents are very expensive». Besides, other main reasons are that «access is fast and easy» (42%); “I’m already paying for my Internet connection» (47%); and «I don’t pay for a content that possibly later I don’t like» (37%). All of these percentages, however, are lower than those of 2015, although regarding the previous Observatory, the weight of reasons «I’m not doing anybody any harm» or «there are no legal consequences for those who pirate, nothing happens» is similar with 24% of users in both cases, compared to 29% and 26% of 2015, respectively.

These grounds are expressed by both consumers of cultural and entertainment content and of football retransmissions (36%), and evidences that it is a general problem and that there is still a lack of clear messages from the Government.

Regarding the ways to access, search engines keep having the main weight as method to access illegal content, with 78%, and Google is used by nine out of ten accesses to pirate content.
More than 67% of webs from which illegal contents were accessed are financed by advertising. From such publicity, 69% corresponds to online gaming and betting sites, 52% to dating sites and more than 39% is adult content.

It is particularly remarkable that more than one third of publicity of pirate sites (37.6%) belongs to consumer products of renowned brands of food, fashion, insurances, telephony, etc., which confirms the urgent need of greater collaboration between the industry and the advertisers to improve the ecosystem of online advertising.

In any case, the sources of income of these sites are diverse, and it is to be particularly highlighted that more than a third of consumers (33.8%) had to sign up as users, transferring personal data that pirates gather in databases that are used for e-marketing campaigns and reach very high prices in the market. Pirate sites also get much more valuable data than one could a priori imagine, that allow them to get important economic benefits, e.g. those referring to Internet surfing habits, rest of web sites visited by consumers, preferences, likes, purchase habits, etc.

Likewise, means of payment play a significant role in the running of pirate sited, especially in the cases in which those sites commercialise premium accounts, get donations or standardise a system to send mobile messages to registered users to inform of the release of new content on the site.
Users that have ever paid for content they have downloaded from these sites is already 11% (it was 9% in 2015 and only 5% in 2014).

While seven out of ten consumers can remember communication campaigns against gender- based violence and more than six do with traffic campaigns, scarcely two out of ten can recall on digital piracy campaigns, a significant decrease in the awareness of these campaigns from 27 to 23%, going from fifth to sixth position in percentage since 2014, and behind campaigns against the excessive consumption of alcohol or tax fraud.

The impact of piracy on employment provides even most disturbing figures for creators and cultural and content industries. In a sector that today directly employs 65,926 people, a scenario without piracy could allow the creation of 21,697 new direct jobs, 33% increase, and one hundred and ten thousand more indirect jobs.

The public fund could be failing to receive almost 361 million euros of VAT as a consequence of piracy, as well as 166 million euros in social security contributions and almost 49 million euros in personal income tax. That is to say, in 2016 the State could have gained additional 576 million euros had it not been for illegal access to content, an accumulated amount of 2.772 billion euros from 2012. 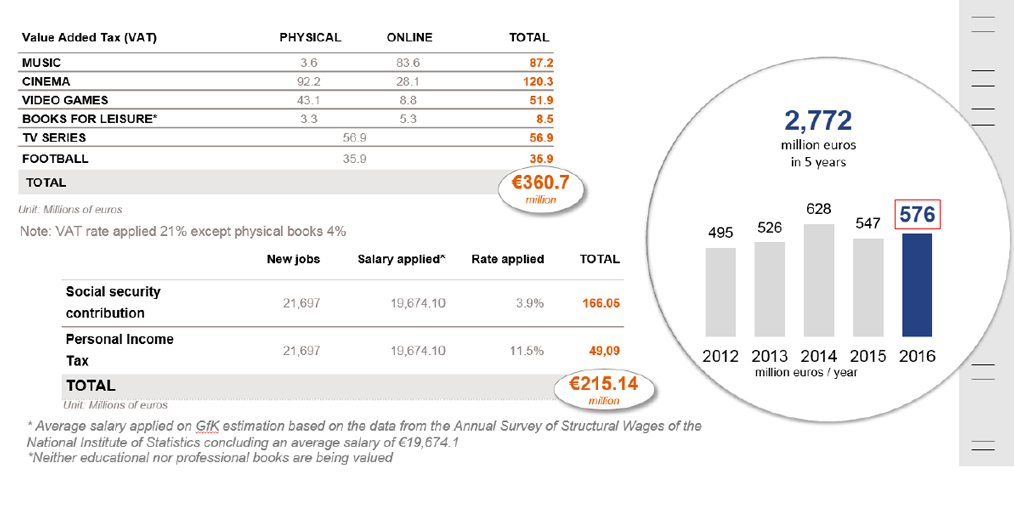 TV SERIES
27% users access illicitly to Tv Series, summing up to 959 million episodes illegally played or downloaded during 2016. Their market value is 1.577 billion euros.
39% of accesses happened during the period it was still being showed on TV (46% in 2015).

LEISURE BOOKS
In 2016, 374 million illegal accesses to leisure books on the Internet were accounted, with a market value of 3.103 billion euros.
Number of consumers accessing illegal contents were on the rise, from 21% of 2015 to over 22% in 2016.
More than 40% of accesses materialised in content published less than one year before (45% in 2015).

VIDEO GAMES
Regarding video games, during 2016 there were 223 million illegitimate accesses. These products’ value reached 5.608 billion euros.
More than 45% of the video games accessed illegally had been in the market for less than one year (53% in 2015).

FOOTBALL
During 2016, a total of 122 million football matches were watched illegally in 10% of Spanish households, a percentage point lower than in 2015. The market value of those retransmissions exceeds 369 million euros.
Football is watched through illegal accesses in 10% of households. The main reason given to justify watching pirate retransmissions is that «football players already earn much money» (72%) followed by «accessing through other systems is very expensive» (58%). «Watching football without paying does not harm my team» is the reason for 41% of users, and for 36% is that «it does not harm anyone». According to 25% of citizens, these grounds are supported by the fact that «everyone does it».

EFFICIENCY OF MEASURES
Most efficient measures against piracy would be, to the internet users’ own view, blocking access to the website offering content (68%) and penalising Internet providers (61%). Following these two, the best measures to reduce infringements would be, according to consumers, imposing fines to users (53 %) and promoting social awareness campaigns against piracy (52%). 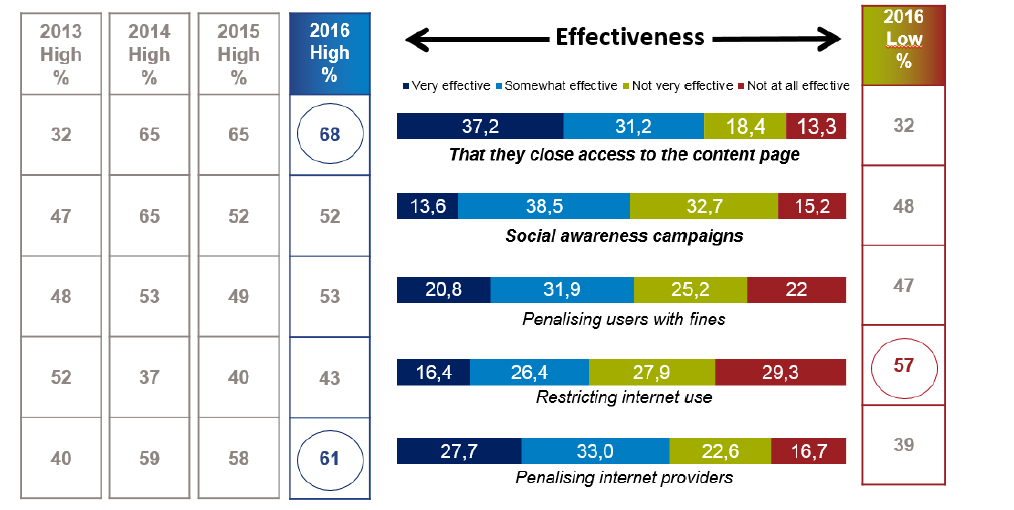