Piracy Observatory 2017: Piracy down another 6%

Digital piracy has experienced a decrease in Spain for second consecutive year in terms of absolute figures, although the percentage of individuals accessing to pirate content remains the same. Thus, in 2017 there were 4.005 billion of digital illegal accesses to content with a market value of 21.899 billion euros. The loss profit suffered by the sector raised to 4.1% and reached to 1.857 billion euros. These are some of main results gathered by the Piracy observatory and digital content consumption habits 2017, carried out by independent consultant GFK and released this Friday by the Coalition of Creators and Content Industries and LaLiga. 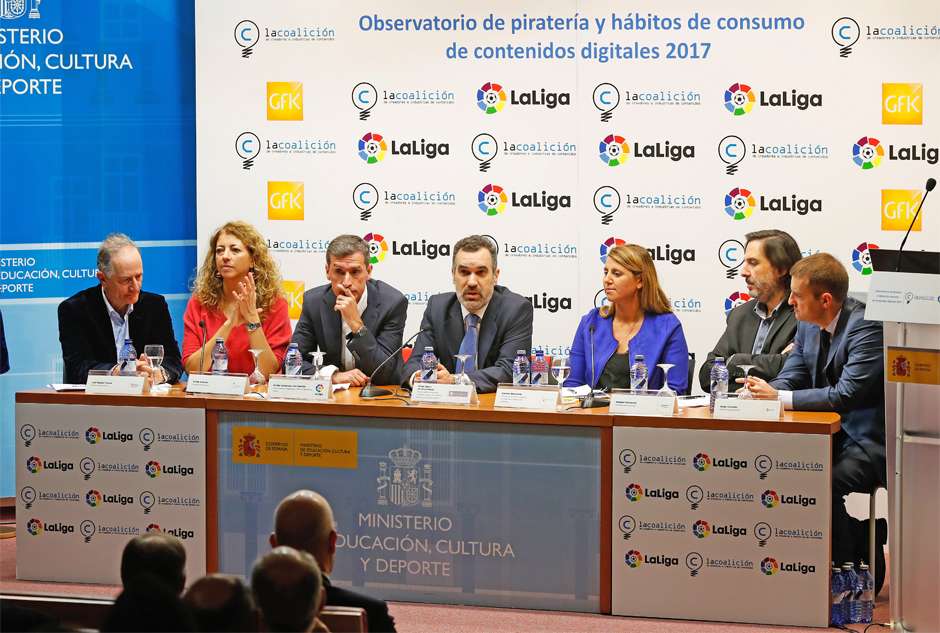 Carlota Navarrete, director of the Coalition, explains that: “it seems the trend initiated in 2016, maintains itself, and although it is still far away from the amount of blocked pirate websites in countries like Portugal (more than 800) or Italy (450), we believe the results show that the commitment undertaken is the right one and that our claim to strengthen and expedite the enforcement of legislative measures, as well as to increase the Public Administration’s staff and technical resources, while carrying out awareness campaigns, it is clearly a very good decision.”

“We also want to highlight that – adds Ms Navarrete – the continuous effort carried out by the industry to fight piracy in all levels, and the boost of almost 90% of the claims submitted trough administrative procedure, caused that last year we achieved important successes in both civil and criminal procedures and we will not stop in our will to improve the legal offer of contents”, and concludes that: “As the problem continues being a serious problem, this slight progress in the fight against piracy should encourage us to continue working and asking all private and public implicated actors to make greater efforts to fight against it.

“LaLiga is satisfied to continue with this trend of decrease on the number of individuals who watch football illegally, as it has been reduced a total of 5 percentage points since 2015, from 21% in 2015 to 16% in 2017. After the creation by LaLiga of a department specifically for the fight against audiovisual piracy and the protection of audiovisual rights, LaLiga Legal Department has blocked 12 websites domains. Besides, thanks to Marauder there have been blocked almost 168,000 videos in social networks and 124 apps, reaching a blocking percentage of 98.44%. LaLiga commitment to the fight against piracy has developed our own technological tools to face it, Marauder and Lumiere”, explains the Head of the LaLiga Antipiracy Department, Emilio Fernandez. 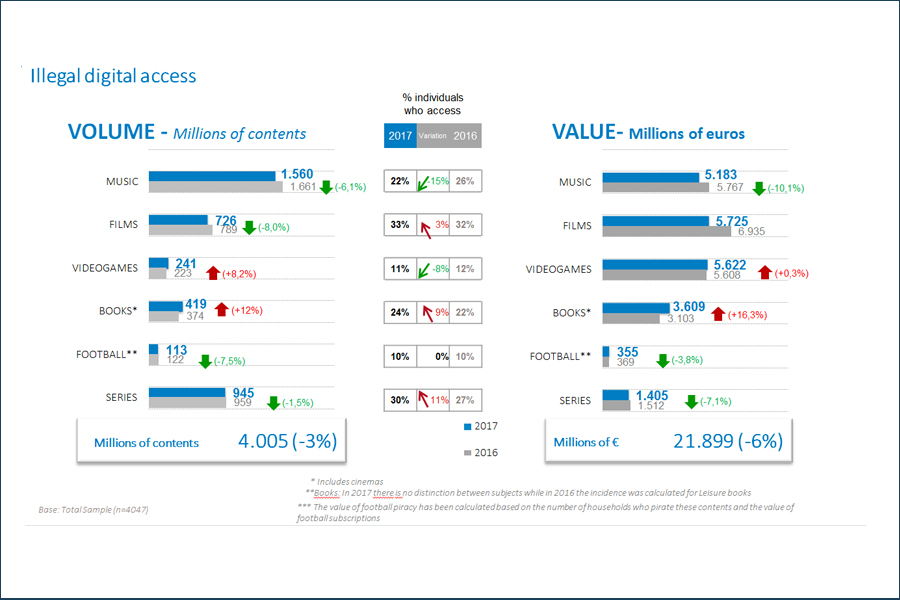 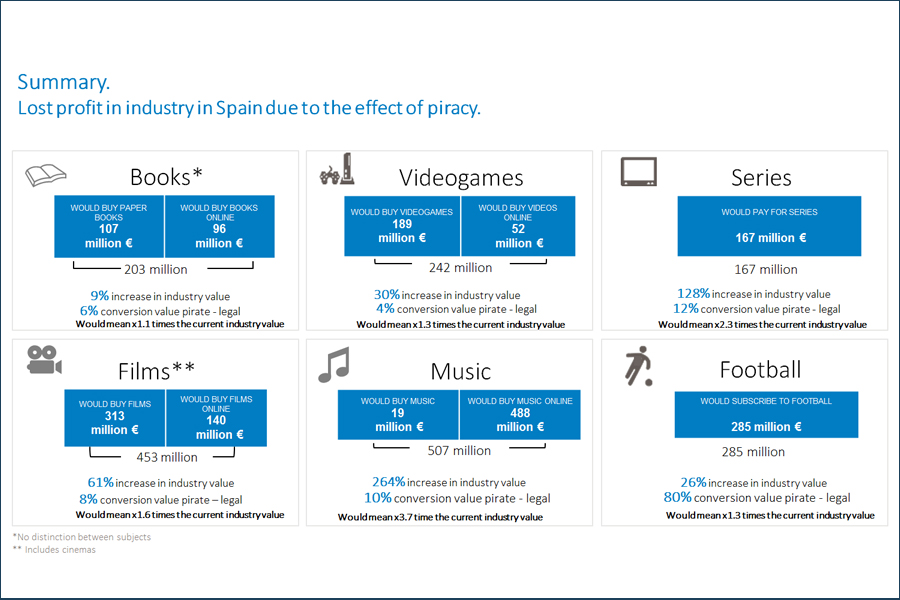 51% of consumers who access to illegal content argue that “original contents are very expensive”. Besides, other reasons are that “access is fast and easy” 43% ; “ I’m already paying for my Internet conection” 50%. All these percentages are higher compared to those of 2016. It also increases the weight of reasons, “I’m not doing anybody any harm” or “there are no legal consequences for those who pirate, nothing happens”, this year reaches in both cases up to 25%.

These grounds are expressed by both consumers of cultural and entertaiment contents and of football retransmisions, and this evidences that there is still a need from the Government to send clear messages on this issue.

Besides, according to the results from this year’s Observatory, 15% of consumers acknowledge having big difficulties to diferentiate legal pages from illegal ones and another 44% only acknowledges it sometimes. 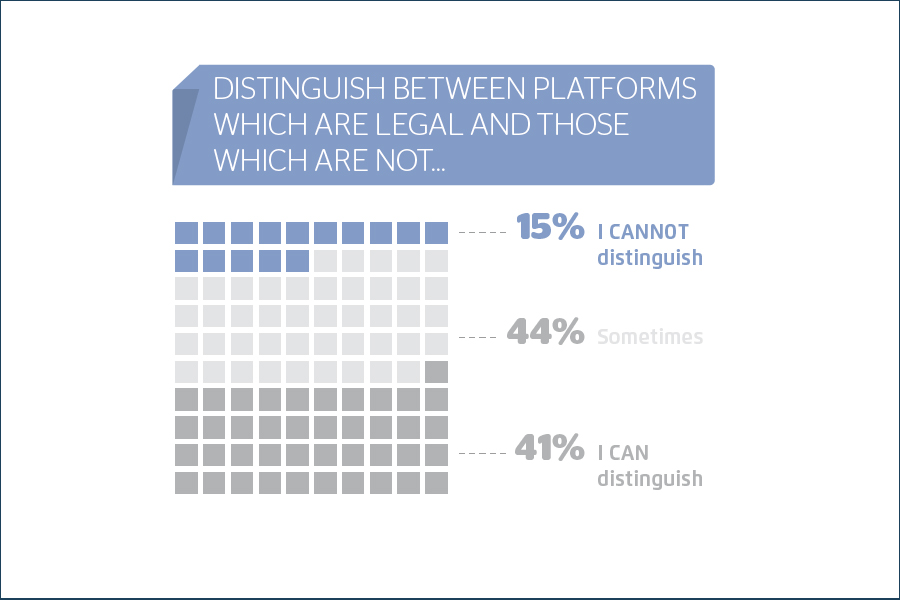 68% of users hiring an internet connection take into account mainly the access speed that enables to access faster to content, same percentage as 2016. However, the percentage of users who value specially the combined offer (high speed or fibre plus content packages) when choosing internet access providers, has increased up to 56% compared to 51% in 2016.

The percentage of websites from which illegal contents were accessed financed by advertising has increased up to 95% (67% in 2016). From such publicity, 68% corresponds to online gaming and betting sites, 58% dating sites and more than 55% is adult content.

It is particularly remarkable that publicity of pirate sites (26%) belongs to consumer products of reowned, percentage still remains elevated (it was 37.6% in 2016), what shows the urgent need to improve collaboration between industry and advertisers to improve the ecosystem of online publicity.

Sources of income of these sites are diverse, and it is to be particularly highlighted that eight out of ten consumers (81%) had to register as user, transferring personal data that pirates gather in databases that are used for e-marketing campaigns and reach very high prices in the market.

Pirate sites also get much more valuable data than one could a priori imagine and which will allow them to get important economic benefits, as for example, Internet surfing habits, rest of web sites visited by consumers, preferences, likes, purchase habits.

Likewise, means of payment play a significant role in the running of pirate sites, especially in the cases in which those sites commercialize premium accounts, get donations or standardize a system to send mobile messages to registered users, to inform of the release of new content on the site, etc. Users who have ever paid for content they have downloaded from these sites already reach up to 8%. 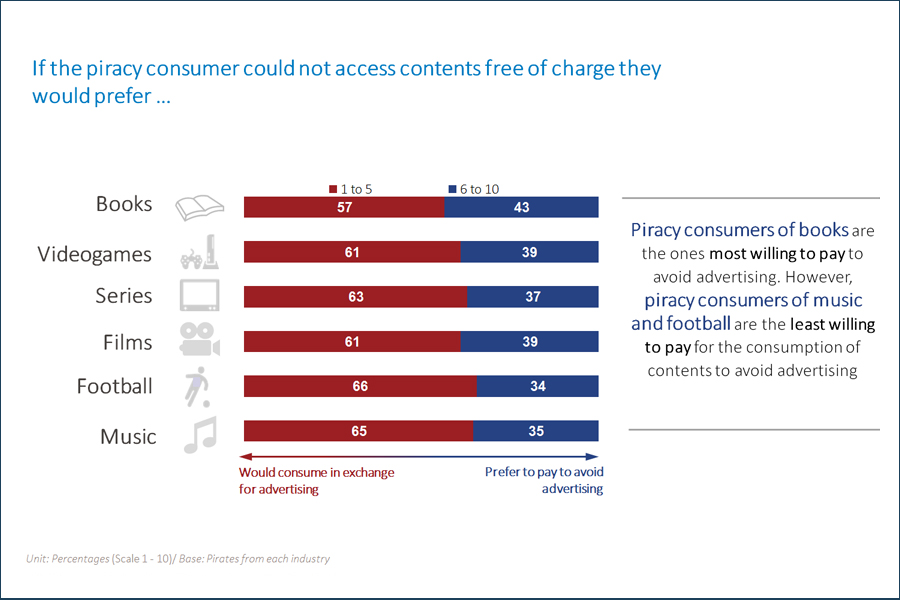 Percentage of consumers, who can remember communication campaigns against piracy, they are two out of ten, this percentage has increased referring to last year, which is a very positive fact that confirms that the Government should continue following such a line.

Anyway, almost all web surfers know the existence of the legal content offer through subscription platforms and other modalities, like Netflix (91%), Spotify (81%), Movistar+ (80%), or HBO (68%), which invalids the reasons given by pirate users who said they did so because of the lack of accessible legal offer at affordable prices. In this respect, it is worth noting that web surfers who are pirates and are online registered in these platforms do no stop pirating, (although they pirate less in some sectors, like music, when registration increases then piracy falls).

The impact of piracy on employment provides disturbing figures for creators and cultural and content industries. Content industries today employ 69,861 people, out of 99,095 employees working for the digital cultural sector, according to Government data. A scenario without piracy will allow the creation of 20,375 new direct jobs, 29% increase and 122,250 more jobs that are indirect.
The public fund have failed to receive almost 372 million euros of VAT because of piracy, as well as 157 million euros in social security contributions and more than 46 million euros in personal income tax. That is to say, the State has stopped receiving in 2017, 575 million of euros because of illegal accesses to content, with an accumulated amount since 2012 of 3.347 billion of euros. 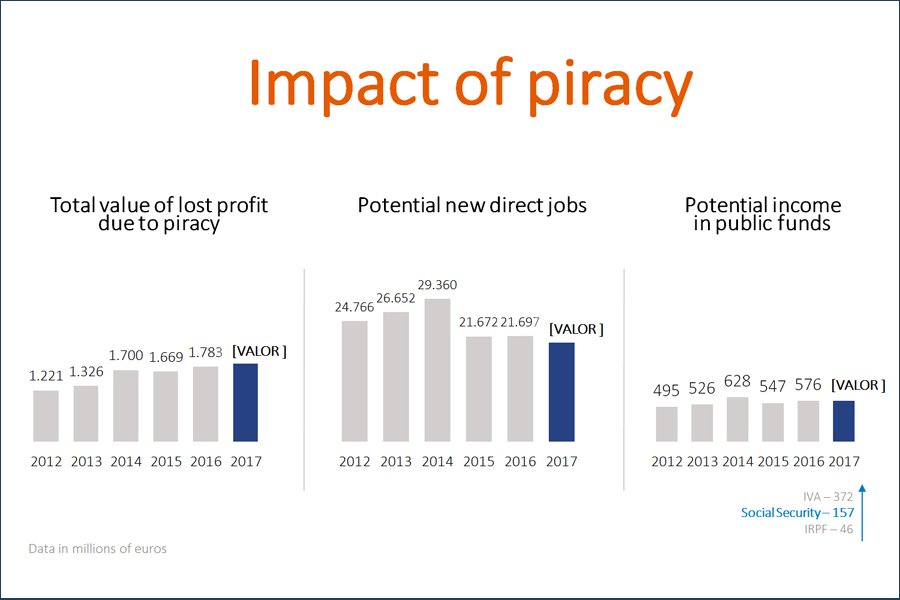 MUSIC
There is a slight increase in the number of individuals who access legally to music and piracy consumption decreases although it still represents 23%.
During 2017, 1.560 billion music contents were illicitly accessed, with a market value of 5.183 billion euros. It is worth noting the increase of the ratio of converting in music from the 7%, in 2016, to 10% in 2017, so despite piracy decreases, loss profit rises.
Number of consumers accessing illegal content decreases from 26% in 2016 to 22% in 2017.
47% of these accesses corresponds to contents with less than a year after their commercial release (48% in 2016).

FILMS
Despite the significant increase in the legal consumption of films, piracy percentage of web surfers who pirate is maintained up to 34%.
The volume of films accessed illegally during 2017 was of 726 million, with a market value of 5.725 billion euros, compared to 6.935 billion in 2016.
35% of accesses happened meanwhile the film was still on screens in cinema theaters, while this percentage was 33% in 2016.

TV SERIES
30% of users access illicitly to TV series, summing up 945 million episodes illegally played or downloaded during 2017. Their market value is 1.405 billion euros.
46% of accesses happened during the period the episodes still being showed on tv (39% in 2016).

BOOKS
24% of internet users download books in digital format from illegal platforms, therefore, in 2017, 419 million illegal digital accesses to books were accounted, with a market value of 3.609 billion euros.
More than 41% of accesses materialized in content published less than one year before.

VIDEOGAMES
The illegal consumption of videogames is maintained, with 241 million of illegal accesses during 2017. These products’ value reached 5.622 billion euros.
45% of videogames accessed illegally had been in the market for less than a year (it is maintained compared to 2015).

FOOTBALL
16% of internet users watched football matches on illegal channels. Therefore, during 2017, 113 million of football matches were illegally watched in 10% of Spanish households, as well as in 2016, with a market value of 355 million euros.

Most efficient measures against piracy would be, according to the internet users’ own view, blocking access to the website offering content (78%) and penalizing internet providers (73%). Following these two, the best measure to reduce infringements would be, according to consumers, promote social awareness campaigns against piracy (61%), this suggests that increased collaboration between the content sector and the ISP (Internet Service Providers) could count with the consumers’ support and positive assessment.