Turning point for progress in the fight against digital piracy

Spain faces the challenge of digital protection of cultural content   In 2020, there were 5.239 billion illegal accesses to..

Spain faces the challenge of digital protection of cultural content

Madrid, 25 oct. 2021. National Archaeological Museum – In Spain, digital piracy experienced another decline in absolute figures, according to data from 2020, recording another annual drop of 7% in access to infringing content, with 5,239 million illegal contents accessed, marking a cumulative decrease of 10% since 2018 and around 24% since 2015. 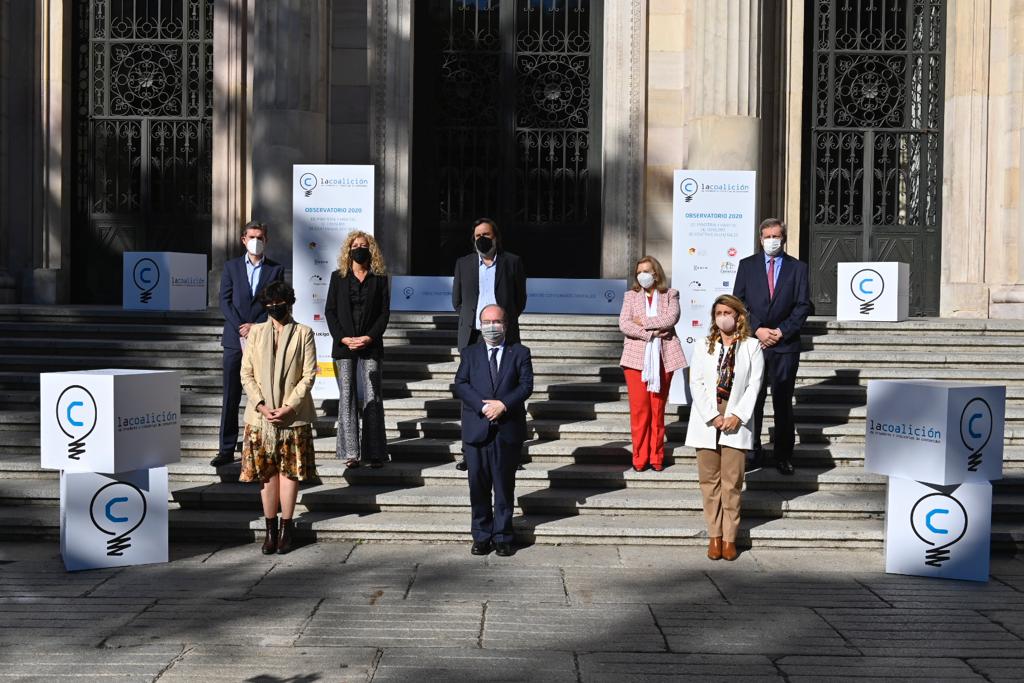 These are some of the main findings of the Observatory on Piracy and Digital Content Consumption Habits 2020, prepared by the independent consultancy GfK at the request of La Coalición and presented by the Minister of Culture and Sport at the National Archaeological Museum.

However, the sector as a whole will suffer 2,416 million euros of damage caused by piracy in 2020, with music being the worst off with 482 million euros, films 322 million, series 138 million, books 240 million, video games 205 million, football 231 million, newspapers 345 million, magazines 426 million and sheet music 28 million.

Among the reasons for illegal access to content, 4 out of 10 consumers say they «do not know how to distinguish between legal and illegal platforms», while 54% claim they do so because they already pay for an Internet connection or pay-TV.

Other very relevant data, which is new in this edition as it is the first time it has been collected, is that 8 out of 10 consumers thought it was «important» to be able to access cultural and entertainment content during the state of alarm, or that 6 out of 10 consider that «cultural creators and industries are a strategic sector for the economy and employment in our country». The same percentage stated that there is, in our country, a sufficient legal offer to consume/access culture.

What stands out most is the increase in the use of social networks to access illegal content (from 23% to 27% in 2020): Facebook (55%), Youtube (39%), Whatsapp (34%), Instagram (28%) Telegram (25%) or Twitter (24%), a fact which, in the opinion of the content industries, makes it urgent to promote measures to reverse this situation. Online streaming is also growing (from 22% in 2019 to 23% in 2020), for the fifth consecutive year, and it is also clear that specific reforms are needed to curb it. In terms of how illegal content is accessed, there is a slight decrease in the share of search engines, from 62% to 58% in 2019, with Google remaining the most used: 9 out of 10 accesses to infringing content occur from its search results.

One of the most novel and disturbing data is related to equipment, 28% of Internet users have an IPTV set-top box and 21% have accessed a VPN for personal use. 40% of internet users have made use of tutorials on how to access content. 18% of these have consulted guides on how to download content, 7% have sought help in obtaining or using platforms and 15% have used manuals for both purposes. In terms of the type of tutorial, the most consulted are those concerning films/series (42%), followed by music (41%), video games (31%), using a VPN (27%), books (23%), modifying a console (21%), using an IPTV (17%), football (13%) and using card sharing (3%).

In addition, 57% of those who access illicit digital content and have tried to access it, found that the website no longer existed or was closed. 15% of these consumers were shown a message explaining the reasons for the website’s closure, 11% were offered another website to access the content, and 31% were helped by a search engine to find a new illegal site.

The percentage of websites accessing illegal content that are financed by advertising remains above 90%, as in previous years. Of all this advertising, 51% corresponds to online gambling and betting sites, 41% to online sales websites and 33% to consumer products from prestigious brands. Therefore, insisting on the responsibility and collaboration of the advertising sector is essential to halt pirate portals’ financing models.

In addition to advertising, another source of income for illegal content websites is the collection of data that pirates fraudulently obtain from databases, which they then trade, fetching very high prices on the market. Thus, 65% of internet users had to register as a user by giving up personal data (email address 55%, mobile phone number 17%, completing an opinion poll 17%).

IMPACT ON EMPLOYMENT AND STATE REVENUE

The effect of digital piracy on employment provides some worrying statistics. More than 20,000 new direct jobs could be created in a scenario without piracy, which would mean an increase of 24%, which, plus indirect jobs, would amount to 130,318 more jobs in total.

In the fight against piracy, almost 8 out of 10 users consider that the most effective measure against illegal access is not allowing access to these websites, while the percentage of people who consider it effective to develop social awareness campaigns is decreasing (54%). Likewise, 69% of users consider it effective to sanction Internet providers, 57% are in favour of sanctioning users with fines and 54% believe that sanctioning offenders by restricting their use of the Internet would be more effective.

“We welcome the good figures in relation to piracy reduction; however, it is not yet over. That is why we must adopt better and more protective copyright regulations, provide ourselves with better tools in order to fight piracy, strengthen the ones we already have, as well as keep creating social awareness in this regard.»

«Spain has come a long way to have a reasonable legal framework and to convince politicians, civil society and the media that piracy is a scourge that must be fought against. However, data continues to reflect a higher volume of piracy than that of our European neighbors, so we must not let up in our efforts and continue to strengthen the mechanisms established to fight piracy. Moreover, in the current context, it is also necessary to encourage and promote legal consumption, using mechanisms such as recently created cultural voucher to engage our young people in cultural consumption through legal channels.»

«Although we are moving in the right direction, there is still a long way to go. Even though legal digital consumption of both films and series is growing, we continue to be one of the sectors most affected by piracy. We are confident that the upcoming legislative initiatives, such as processing of the Digital Services Act in Brussels, will come to reinforce, with indispensable support of Spain, the policies to make Internet a more transparent, safe and reliable space, where consumers and businesses are protected from illegal online activities, such as piracy.»

«Illegal consumption of video games has not been altered and remains at the same levels as in previous years, which shows that piracy continues to be the main historical concern of this sector in our country and therefore the first obstacle in consolidation of video games industry in Spain. «It is essential to recognize the value provided by creators of video games and continue working together to advance in this area by effectively applying current regulations.»

«In 2020, video games contributed in a unique way to support society by connecting people while they were physically separated. It has facilitated vital points of social connection and interaction, entertainment, and distraction in these harsh months of lockdown. Enforcement of intellectual property law is critical for safeguarding the development of culture and creation.»

«I refer to the Minister of Culture with an ask to make that special effort in stopping the piracy of books, newspapers, magazines and music scores that is proliferating on social networks, such as Facebook, as well as on messaging services, such as Whatsapp and Telegram.»

«In LaLiga and Mediapro we have the team, the technology and the knowledge to tackle this scourge that is audiovisual piracy, behind which the organizations that profit from the work of legitimate creators hide; unfortunately, we lack a legal tool that would allow us to block content in a fast and agile way in order to win this game”

¨As creators and cultural industries, we demand an additional effort to consolidate the progress made in recent years. On the one hand, we need the recently approved reform of the LPI to be applied swiftly, the imminent transposition of the European regulations affecting copyright protection to be adequate and, finally, we need to strengthen the structures and provide greater resources for defense and promotion of content, since it is the basis of a strategic sector for employment, economy and international competitiveness of our country».

49% of accesses correspond to content released less than one year ago, compared to 54% in 2019.

22% of users illegally access TV series, totalling 1,003 million illicitly consumed content during 2020, a figure that decreases with respect to 2019, where the number of accesses was 1,068 million. Its market value is 1,562 million euros. (138 million in damages). Legal digital consumption of series is on the rise.

In 2020, 18% of users illegally accessed magazines, downloading a total of 147 million pieces of content illicitly, with the value of these downloads amounting to 346 million euros (426 million euros in damages). Illicit consumption of digital press (18%) is higher than legal consumption (5%).